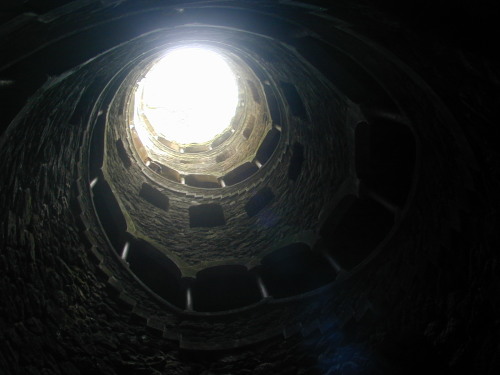 It felt like the bottom of a well. I don’t know how I got there, I just did. I could see the sky, the clouds and stars, at the top. I could even see the light from bon fires, and the shadows of people going by. At first I hoped that someone would pull me out of there. It was for me logical thing to do, someone would have to miss me. And so I waited floating on that shallow dark water for some salvation. Days passed. Hope turned into hopelessness. And I got angry, like it was the Universe duty to get me out of that well, and it wasn’t doing its job. I kept waiting for help that never came. Anger turned into anguish, life turned darker. If the Universe wasn’t taking me out of that well, maybe that was what existence was supposed to be, a shallow dark well devoid of warmth. Yet I kept waiting for that golden rope, that would take me out of that well instantly. Little by little the well became something that was. Life was defined, and by limited the perimeter of that well. And the rope became just something mythical, that if attained it would put me where I was supposed to be.

Then, one day I remembered that I could stand. It was just well after all. Another day I felt the well walls. Maybe I could climb them. I tried, and fell back dozens of times, trying all sorts of paths. With each try the same hope for the rope salvation kept coming. But with each try, the angriness, the anguish and the hopelessness faded. After a while, nothing else matter, only climbing the well. There was no motivation, no epiphanies, just climbing. Fuck ropes, fuck the universe, fuck everything else. Getting out was the only objective. And just as I was climbing, well walls started changing, like a gradient.

The well never had a top. Its all continuous, so it never existed a place to anchor that rope. And for all that matter, there was no rope. It never was. Unwillingly I got myself into that well, and only I could get out of it. The only tragedy is that there are no life lessons, no prize, no glorious outcome. It just is and continues to be.